I'm a rule follower. I always have been and I suppose I always will be. I guess I engaged in my share of hijinks and shenanigans back in my salad days, but by-and-large, I’m an average rule-following, law-abiding citizen, just like the rest of you.

So, back in March of 2015, when California—spurred by Governor Jerry Brown—passed new mandatory restrictions on residential water use, I got ready to do my part. Among the more complex and finer points of the rules, there are two simple mandates:

Eager to comply with the new restrictions, I dialed down my irrigation controller to two days a week (and in fact turning it off completely for at least one zone); and being on standby for the rainy season—ready to dash outside in my pajamas and turn off the controller when the rain comes.

However, it didn’t take me long to realize that not everyone got the message or thought the rules applied to them. When I walk around my neighborhood, I see plenty of homes watering on the wrong days, the wrong hours, into the street, or even shooting geysers of water into the air (broken sprinkler head). Most my neighbors don’t see this stuff because they aren’t up in the wee-hours of the morning wandering around studying community irrigation patterns. Out of sight, out of mind.

Walking around at dawn isn’t really an effective way to satisfy my curiosity on the subject at scale. Here at WaterSmart, however, we can really dig into the data streams provided by advanced metering infrastructure (AMI) and get a handle on the subject. AMI gives a utility hourly water usage data from each of its meters. Theoretically, if you can separate irrigation from indoor usage, we can begin to paint a picture of how these new regulations are working.

Working alongside data scientists Will Holleran and Christopher Inkpen, we’ve done just that. Meet IDA (patent-pending). IDA is our new (Artificially Intelligent) Irrigation Detection Algorithm, with which we can detect and analyze durations and magnitudes of timed irrigation at the individual household level.

Armed with this new AI, I went back to see if the Governor’s word was getting out by looking at all the timed irrigation for a medium-sized Southern California community that allows for lawn watering on Tuesdays and Saturdays (data for September, October, and November of 2015). 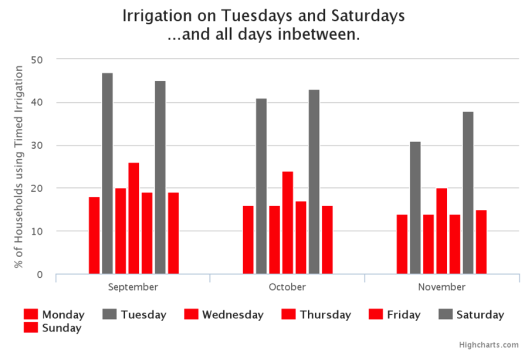 Let’s take a look at the chart together. The gray bars represent the households irrigating on Tuesday and Saturday, just as the regulations require. Roughly 40% of all the households in town irrigate their lawn using timed irrigation (the number is decreasing as we move into winter). However, looking at the red bars, we can quickly see that 15-20% of the households are not watering within the regulations!

You can also observe a spike on Thursdays, which is a holdover from the pre-Gubernatorial mandates in which this city had three-days a week watering. So, more than half of the households that were on a Tuesday, Thursday, Saturday schedule never got the message that Thursday was off the list.

So how much water is that, anyway? Well, for those in compliance, IDA estimates 50 million gallons (MG) in the month of October, and for those out of compliance, 33MG. That means 43% of irrigation used in October was not on Tuesday and Thursday. Again, sounds like the word isn’t getting out.

In early November, Southern California received some much needed rain. How many people dashed out, umbrella in hand, to turn off their irrigation controllers before, during, or after the rain? Care to take a guess?

Overnight on November 2nd, 2015, this city got a good rainfall. Not a torrent or a flood, but about a ½” of rain, over a nice long 6 hour period. The 3rd was a Tuesday, an approved watering day. 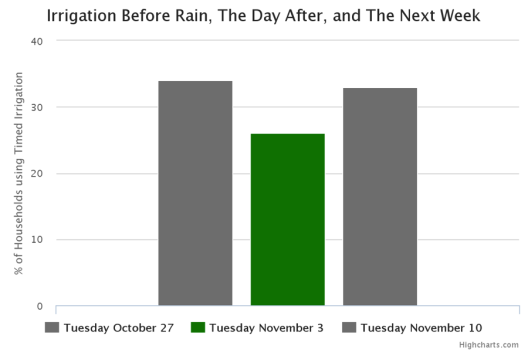 These results actually surprised me a little bit. 25% of Tuesday irrigators actually turned down, or turned off, their systems following the rain. Some timed irrigation systems have rain sensors, soil-moisture sensors, or internet-based interfaces; while others require someone to wander out there in their pajamas and turn off the controller. These good actors saved the city 1.5MG of potable water, and saved themselves money in the process. However, the fact remains that the green bar should have been close to zero. Irrigation within 48-hours of a rainfall event is not permitted.

Based on this research, there’s a lot of room for citizens to pitch in and get behind their city initiatives to comply. Many of us can be lazy, forgetful, or simply too exhausted to add another item to their list of cares and worries. That’s where WaterSmart can help. Our tools:

Until my next blog post, farewell, and keep that umbrella near your pajamas for a late-night irrigation controller dash. I’ll probably see you out there!

To Build.. or Not to Build?

Addressing the FEAR of Water Innovation