Fix a Leak Week In Action...

This week is EPA WaterSense’s Fix a Leak Week – an annual event designed to bring awareness to the issue of household leaks, and to remind Americans to check their fixtures and irrigation systems.

Lately, our nation’s leaky water infrastructure has been a hot topic for discussion. The American Civil Society of Engineers gave US drinking water infrastructure a “D” grade; the system is in need of at least $1 trillion investment in the next 20 years. This is becoming evidently apparent as cities across the US are dealing with emergency pipe bursts and water main breaks. The pipe break this past summer at UCLA, which spewed more than eight million gallons of water, garnered an especially large amount of media attention. Since then, the LA Times has reported that the city has a $1 billion aging-infrastructure problem on their hands.

Leaks and infrastructure deficiencies are a problem not just municipally, but at a residential level as well. Nationwide, household leaks waste more than 1 trillion gallons annually. Ten percent of homes have leaks that waste 90 gallons or more per day, but in many cases residents have no idea that they have a leak in their home. A drippy faucet is easy to see, but a leaky toilet or a small crack in an underground pipe can go unnoticed for months.

The emerging technology of smart water meters and real-time leak alerts are incredibly effective solutions to this invisible source of water waste. Advanced Metering Infrastructure (AMI) systems that monitor a home’s water use in hourly or even daily increments, are much better at catching leaks than traditional water meters that are only read monthly or bi-monthly. The next step is having an alert system connected to the smart meter.

For utilities that have AMI systems, WaterSmart offers real-time leak alerts that are delivered to both the water provider and as an SMS or email message to the homeowner. When the meter detects an unusual usage pattern, such as a consistent low-level of water usage throughout the whole night, the system will send out notification of a potential leak. Depending on the nature of the anomaly picked up by the meter, WaterSmart provides suggestions regarding where the leak may be coming from and how to address it. If the water utility notices that the leak continues to persist even after the alert has been sent out, they can personally reach out to the homeowner and help them trouble-shoot.

Park City Water in Utah was one of the first customers to receive our leak detection services. They installed AMI meters in 2009, and partnered with WaterSmart Software in 2014. In serendipitous timing for Fix a Leak Week, we received this picture from a Park City resident a few days ago: 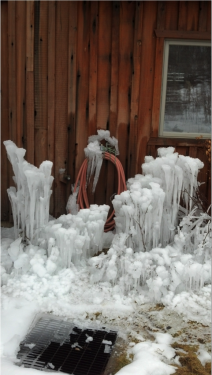 First, just take a second to appreciate this crazy photo. If you have no idea what you’re looking at (and you are not alone, we assure you), allow us to explain. This is a photo of a frozen hose leak in a residential backyard. This Park City customer received a WaterSmart leak alert, called their Home Owners Association (who said they didn't think anything was wrong), and then called Park City Water. A field tech went out and found this and quickly addressed the leak. This is a perfect example of how smart leak alert systems can catch water-waste that would otherwise go overlooked.

This story is not uncommon among WaterSmart customers. Within the first three months of the program, Park City Water delivered over 150 leak alerts to residents, 70% of which were closed within ten days of the notification. Across the board, WaterSmart Software has detected over 4,600 leaks since rolling out this technology last year. These leaks add up, and using smart meter technology along with our own data analytics software allows us to catch them before they become a major problem. Real-time leak alerts save residents and utilities water and money, and can prevent a significant, potentially hazardous flooding situation in the home. And of course the more leaks we catch, the more water we save from that 1 trillion gallons wasted every year.

Removing the Guesswork: A Case Study on Cotati and Their Bridge to AMI

Software and The Importance of Customer Service