2017 Prediction: Utilities Will Move to the Cloud

As we near the end of another year, our thoughts inevitably turn to making predictions about what the next year might bring. My prediction: In 2017, one of the last remaining hurdles slowing utilities’ adoption of the cloud will fall.

The capabilities of the cloud have taken a few years to mature, but the benefits are now compelling for any industry. Even stringent security concerns of regulated industries like utilities have been addressed and are falling away according to IDC Energy Insights.

Indeed, the highest remaining hurdle for utilities considering a move to the cloud—including a cloud CIS—isn’t a technological one, but a financial one. And that hurdle is about to fall, too.

Capitalizing cloud: Yes, you can

The utilities industry’s practice of calculating ROI on its infrastructure assets requires capital expenditures. This is especially true for assets with long lifespans. The average utility CIS lives to see at least two decades. It’s not at all uncommon for a utility customer management solution and its hardware to live long past its prime.

But the truth is that utilities can already capitalize many expenses for cloud implementations. In fact, the difference in what can be capitalized for implementing a cloud CIS like VertexOne and a traditional on-premise utility CIS is smaller than you might think.

The only significant expense that cannot be capitalized is the hardware (unless of course you purchase the hardware and put it in someone else’s data center), which over 5 years represents only 3% of your total cost of ownership. 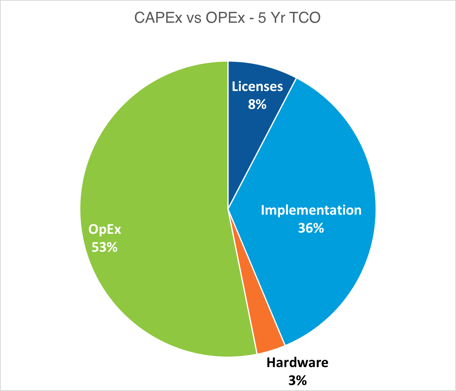 Compared to an on-premise CIS, the only difference in capitalizing a cloud CIS is the cost of the hardware—just 3% of your TCO.

If a utility buys perpetual software licenses for the cloud CIS, it can capitalize the expense. VertexOne customers, for example, own their SAP software licenses. (Be aware that not all Software-as-a-Service companies sell the licenses to their customers.)

Whether in the cloud or on premise, a utility CIS implementation is a complex, capital project. Besides software licenses, the predominant cost is for the professional services needed to implement the cloud CIS solution, including the cost of moving it to another data center and managed service provider. A utility can capitalize these costs, just as with on premise projects.

Utilities can capitalize many system upgrades as well. As long as the upgrade delivers new functionality, a portion of the costs might be treated as CapEx, just like the original implementation.

The last hurdle coming down soon?

So, you can already capitalize a lot more of a cloud CIS implementation than you probably thought. The main difference is the hardware. And at just 3%, even that is a minimal piece of the total cost.

But there’s good news on the remaining costs, too. At its annual meeting in November 2016, the National Association of Regulated Utility Commissioners (NARUC) recognized that cloud technology can offer cost and operational advantages to utilities, and recommended removing the cost constraints preventing a move to cloud computing. They agreed to encourage states’ utility commissions to allow utilities to treat cloud expenditures the same as on premise technology expenditures. If the states agree, which seems likely, moving to the cloud will mean that utilities can earn a regulated rate of return on their investments in cloud technology.

Utilities Move to the Cloud

It’s still 2016, and most industries have adopted the cloud to keep up with rapidly changing business drivers. Now NARUC and state regulators recognize utilities are dealing with as much change as any other industry.

How a utility purchases its technology isn’t critical to its mission of providing reliable service to customers. The benefits and cost savings of the cloud would indeed help with that mission. Now, with NARUC’s recommendations, the final barriers to utilities having the agility and cost advantages of the cloud may all but disappear.

That’s why I predict 2017 will be the year more utilities accelerate their move to the cloud.

See How VertexOne is Changing the Utility Industry for the Better

Artificial Intelligence and Machine Learning in the Utilities Industry